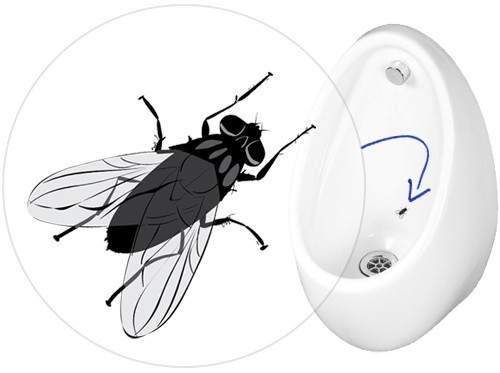 Having a visible target breeds results. The urinal fly has proved it so. Its presence in the men's room has the potential of reducing urine spillage at a rate of eighty percent more or less.

The urinal fly is the brainchild of an economist who worked in Schiphol Airport in Amsterdam. Unpleasant odors emanating from urine spills invaded his nostrils as he visited the bathrooms in said airport. In his determiantion to solve the urine problem, the Dutch economist did not focus on mitigating odors with air fresheners.

Faithfully applying economics’ specificity rule, he endevoured to identify the root of the problem. Initially he thought poor marksmanship was the issue. But then he considered the fact that one cannot aim and hit the bull's eye in the absence of a visible target. Naturally, when the sole purpose of visiting the urinal is emptying the bladder, directing the outflow of urine so as to reduce its spilling out of the vessel is not something of utmost priority.

Hence, the economist realized that the solution to the problem was to infuse the urinal experience with purpose by drawing a target at the specific point in the vessel where spillage would be reduced to its minimum. So he proceded in that direction and created the famous target-sticker. Having the form of a fly or bee, the proper installation of this target has effectively increased the accuracy of urinal users by as much as 85% according to studies.

Something to aim at is, therefore, of fundamental importance not only for reducing urine spillage, but to set, sustain and increase our level of success in virtually each and every dynamic of life.

Devoid of the urinal fly, men miss eighty percent of the time. With the urinal fly in place the misses are reduced to a mere twenty percent. Analogously, devoid of a specific goal or target it’s impossible for one to be effective and efficient in the pursuit of excellence.

As a matter of fact, human beings tend to behave like a flame of fire when we operate without a target in view. Behaving in such a fashion, we needlessly burn energy; overlook opportunities carelessly; and destroy relationships recklessly. All this simply because we're not equiped with a roadmap indicating the what, the when, the why and the how to get to a predetermined final destination.

With clear and well-established goals, on the other hand, we are able to transform our fire into a powerful laser beam, aiming for the best of the best consistently even as we prepare diligently to give, to serve, and to lead at very step and stage along the way.